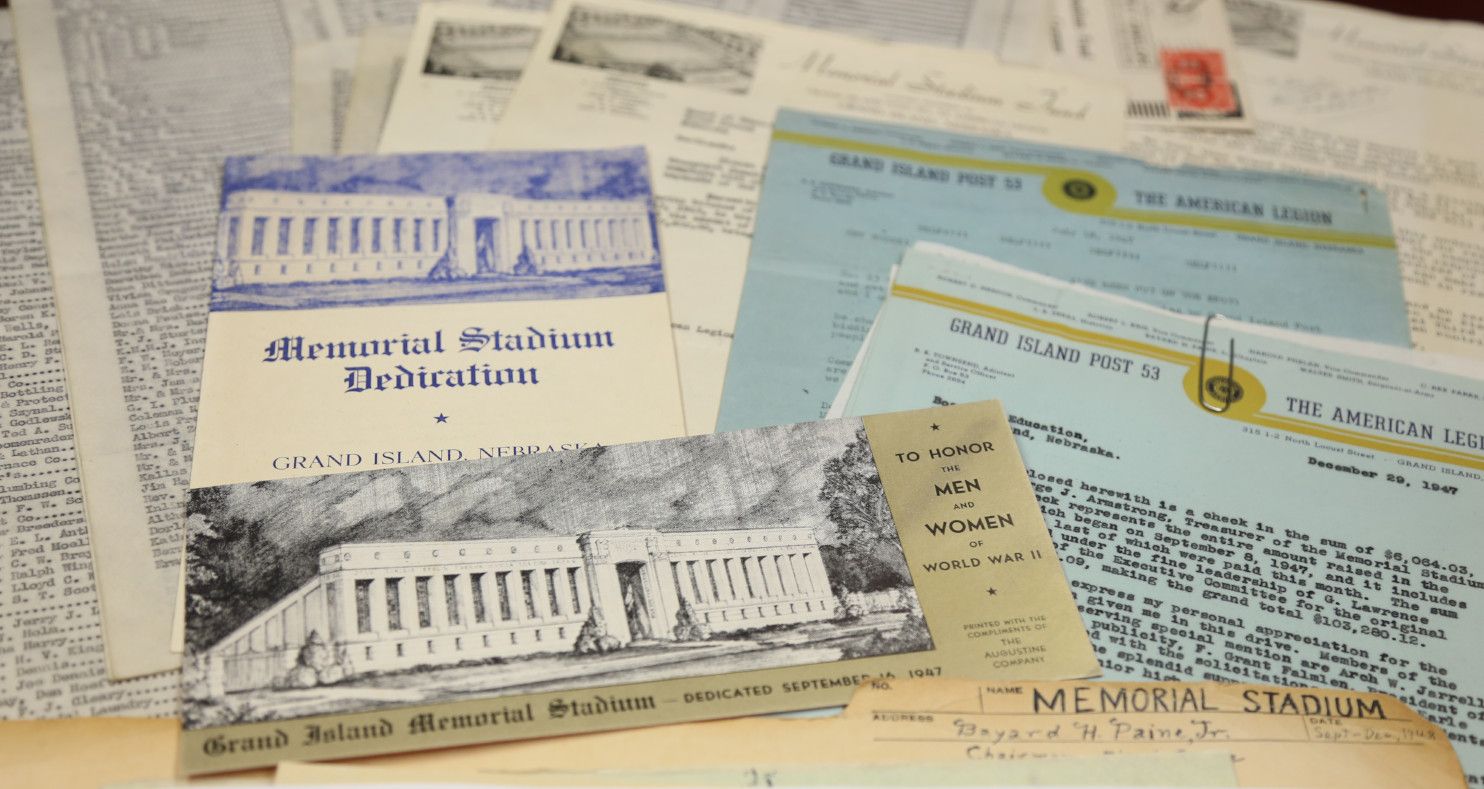 Early 1945 - Grand Island Public Schools Board of Education purchased the Old Baptist College Property with the intent to develop an athletic field to replace Ryder Park.

Early spring, 1945 - A group of businessmen gathered for coffee at the Yancey Hotel which sparked the idea for Memorial Stadium. “Grand Island could use a good football stadium,” remarked one businessman while talking about community development and another remarked, “Why not go after one?”

May 1945 - The campaign began and continued through that year. George Winters, General Manager of the Grand Island Daily Independent, pledged the newspaper to $5,000. The Lions Club pledged $1,000 and an anonymous donation of $1,000 brought the pre-campaign giving to $7,000. The Liederkranz then matched the Independent’s gift pledging $5,000. The gifts from the Independent and the Liederkranz were the two lead gifts, however there were 16 other gifts that were $1,000 or more.

November 1945 - The City of Grand Island, after much negotiation, agrees to purchase the Ryder Park
property from the Board of Education for $17,800.

Early 1947 - The American Legion agreed to put on a final campaign push to bring the fund over the $100,000 mark and Bayard H. Paine Jr., a recently returned World War II Veteran, chaired the committee. That committee completed the job, and the final report showed more than $102,000, all of it raised except the $17,800 paid with the proceeds from selling Ryder Park.

The stadium was designed by Architect E.G. Schaumberg, Lincoln, NE and constructed in 1947.

Tuesday, September 16, 1947 - Memorial Stadium was dedicated with 4,000 people in attendance. This was a large crowd considering it was a weeknight and no game was played. The ceremony began with a parade led by the Senior High Marching Band.

The Invocation was delivered by the Reverend William A. Hubbard of First Methodist Church in Grand Island. The Master of Ceremonies was Arch Jarrell, Editor of the Grand Island Daily Independent. Guardianship of the Memorial Stadium was presented to the Board of Education President, F. Grant Falmlen, in the form of a list of all campaign contributors.

Chief Justice of the Supreme Court of Nebraska, Robert Simmons was the Principal Speaker. Judge Simmons described the stadium as a “living memorial.” He also praised the City of Grand Island for “following the old American custom of solving its own problems, in its own way, at its own expense.” The Benediction was given by Reverend Leo Keating, Pastor of St. Mary’s Cathedral in Grand Island. A volley by an Army firing squad and playing of the taps followed.

September 19th, 1947 - Coach Jerry Lee led the Grand Island Islanders to a 45-0 victory over Norfolk and an undefeated season followed. A name, Bobby Reynolds, flashed onto the football horizon during that first game in Memorial Stadium. The team defeated North Platte to win the Big Ten.

1956 - According to an article in the Grand Island Daily Independent dated June 22, 1957, “Since its dedication, Grand Island Senior High has won 33 home games and had tied one at Memorial Stadium and it is considered Nebraska’s finest football stadium.”